[On-demand demo] Choosing the right feature store: Feast or Tecton? Watch these short demos to understand which is best for your team Feature stores are operational ML systems that serve data to models in production. The speed at which a feature store can serve features can have an impact on the performance of a model and user experience.

In this blog post, we show how fast Feast is at serving features in production and describe considerations for deploying Feast.

One of the most common questions Feast users ask in our community Slack is: how scalable / performant is Feast? (spoiler alert: Feast is very fast, serving features at <1.5ms @p99 when using Redis in the below benchmarks)

In a survey conducted last year (results), we saw that most users were tackling challenging problems like recommender systems (e.g. recommending items to buy) and fraud detection, and had strict latency requirements:

Over 80% of survey respondents needed features to be read at less than 100ms (@p99). Taking into account that most users in this survey were supporting recommender systems, which often require ranking 100s-1000s of entities simultaneously, this becomes even more strict. Feature serving latency scales with batch size because of the need to query features for random entities and other sources of tail latency.

In this blog, we present results from a benchmark suite (RFC), describe the benchmark setup, and provide recommendations for how to deploy Feast to meet different operational goals.

There are a couple of decisions users need to make when deploying Feast to support online inference. There are two key decisions when it comes to performance:

Each approach comes with different tradeoffs in terms of performance, scalability, flexibility, and ease of use. This post aims to help users decide between these approaches and enable users to easily set up their own benchmarks to see if Feast meets their own latency requirements.

How to deploy a feature server

While all users setup a Feast feature repo in the same way (using the Python SDK to define and materialize features), users retrieve features from Feast in a few different ways (see also Running Feast in Production):

The first four above come for free with Feast, while the fifth requires custom work. All options communicate with the same Feast registry component (managed by feast apply)  to understand where features are stored.

Deploying a feature server service (compared to using a Feast client that directly communicates with online stores) can enable many improvements such as better caching (e.g. across clients), improved data access management, rate limiting, centralized monitoring, supporting client libraries across multiple languages, etc. However, this comes at the cost of increased architectural complexity. Serverless architectures are on the other end of the spectrum, enabling simple deployments at the cost of latency overhead.

Building a Feature Store dives into some of the trade-offs between online stores. Easier to manage solutions like DynamoDB or Datastore often lose against Redis in terms of read performance and cost. Each store also has its own API idiosyncrasies that can impact performance. The Feast community is continuously optimizing store-specific performance.

Feast’s feature retrieval primarily manages retrieving the latest values of a given feature for specified entities. In this benchmark, the online stores contain:

As described in RFC-031, we simulate different query patterns by additionally varying by number of entity rows in a request (i.e. batch size), requests per second, and the concurrency of the feature server. The goal here is to have numbers that apply to a diverse set of teams, regardless of their scale and typical query patterns. Users are welcome to extend the benchmark suite to better test their own setup.

The raw data exists at https://github.com/feast-dev/feast-benchmarks. We choose a subset of comparisons here to answer some of the most common questions we hear from the community.

A key decision users must make is whether they want to use Java or Python for feature retrieval.

We recommend starting with the Python centric stack. This is battle tested and works at scale, but suffers from generally slower retrieval time. A Python centric stack can be easier to manage (especially since feature retrieval & data scientist workflows are in Python). Working with a Java feature server requires a slightly more complicated architecture.

Throughput wise, the Java feature server, when aiming for >99.9% successful requests for a 100ms timeout maxes out at ~ 5k QPS for single row fetches of 250 features (50 parallel clients).

Java vs Python: latency when varying by batch size

For this comparison, we check retrieval of 50 features across 5 feature views.

At p99, we see that Java performance is significantly better (~5-7x faster) at 22ms, though Python still meets many of our user’s latency requirements (125ms).

Java vs Python: latency when varying by number of requested features

Here we separate comparisons by users in AWS vs users in GCP:

We see that Redis is typically around 10-20x faster than Datastore when working with batch size = 1. 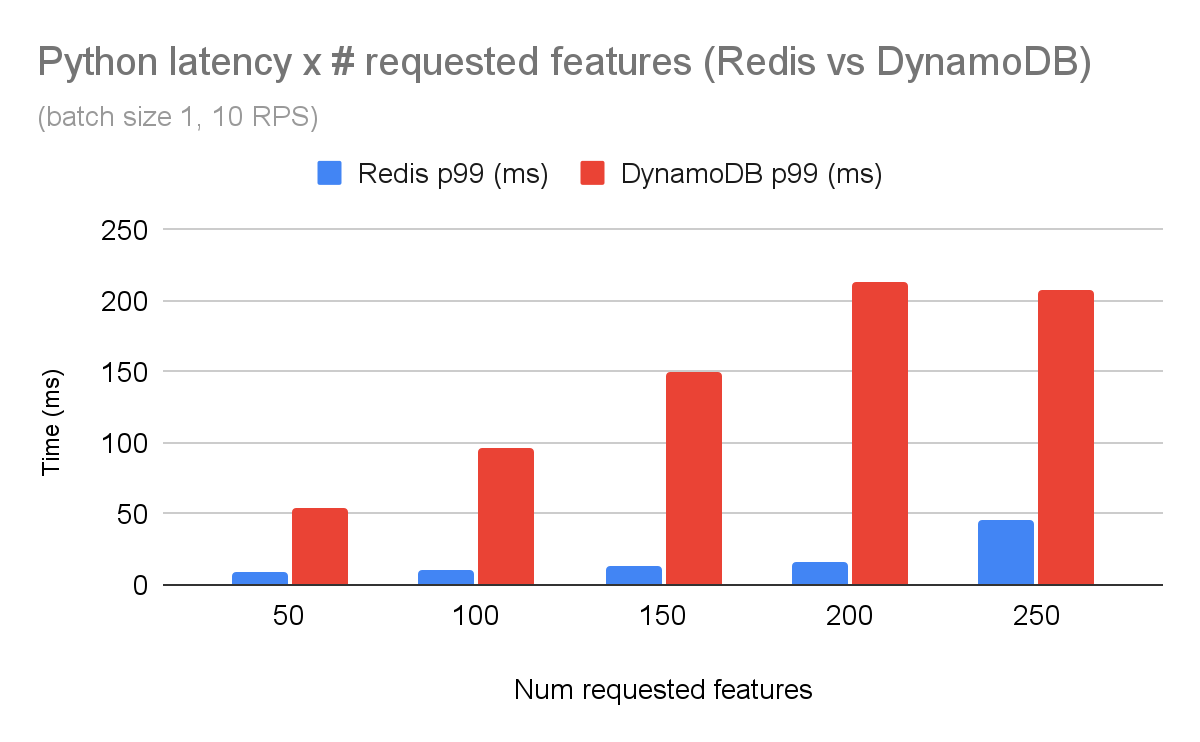 Note: there are managed services for Redis like Redis Enterprise Cloud which remove the additional complexity associated with managing Redis clusters and provide additional benefits.

Join the conversation in our community Slack channel or our GitHub repo. Contributions and feedback are welcome!